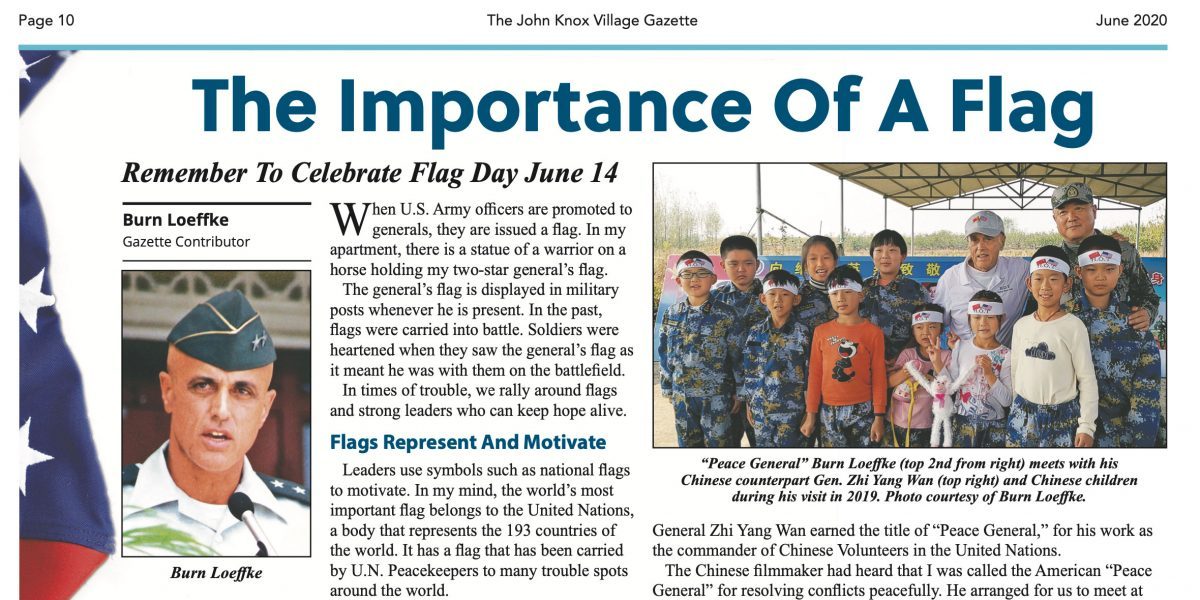 This month’s newsletter, as featured in the John Know Village Gazette in the June 2020 edition.

When U.S. Army officers are promoted to generals, they are issued a flag. In my apartment, there is a statue of a warrior on a horse holding my two-star general’s flag.

The general’s flag is displayed in military posts whenever he is present. In the past, flags were carried into battle. Soldiers were heartened when they saw the general’s flag as it meant he was with them on the battlefield.

In times of trouble, we rally around flags and strong leaders who can keep hope alive.

Leaders use symbols such as national flags to motivate. In my mind, the world’s most important flag belongs to the United Nations, a body that represents the 193 countries of the world. It has a flag that has been carried by U.N. Peacekeepers to many trouble spots around the world.

The U.N. flag has two wreaths that symbolize peace with images of land masses that represent the peoples of the world. It is a symbol that all nations can unite in a common purpose for cooperation and harmony.

The flag that signifies the United Nations is possibly more important to- day than ever before, in our world-wide need for cooperation.

During my years in the U.S. Army, I was referred to as the American “Peace General.” In October of 2019, I was invited by a Chinese filmmaker to travel the 21 hours from Miami to Northwestern China, to meet with China’s “Peace General.”

Who is this Chinese general, who has a farm that is run by retired military members, many of whom served with him as Peacekeepers?

General Zhi Yang Wan earned the title of “Peace General,” for his work as the commander of Chinese Volunteers in the United Nations.

The Chinese filmmaker had heard that I was called the American “Peace General” for resolving conflicts peacefully. He arranged for us to meet at the general’s farm to film a documentary on two “Peace Generals.” The documentary will show us cooperatively teaching preventive medicine to children, who later teach their parents what they learned.

Right now, the world is in turmoil. A virus has wreaked havoc in every country and wars continue that never seem to end. Many of us hope that this world-wide-health crisis will help bring us together to fight the three great- est threats of our time, any of which can end civilization as we know it: The danger of nuclear war, climate change and pandemics. Let us pray, that just as the two “Peace Generals” met in a common purpose, our world’s leaders can unite around the U.N. flag to promote health, peace and cooperation.

Burn Loeffke, a retired military officer, has been wounded, survived two parachute malfunctions and two helicopter crashes in combat. As a captain in his 20s, he was  an Army swimming champion. As a colonel in his 40s, he participated in a military decathlon in Russia. As a general in his 50s, he ran three marathons in China. He has been an advisor to the President’s Council on Physical Fitness. As a senior, he starts each day at Hollywood Beach, FL with 200 stomach crunches, 10 minutes of stretching, and with Dr. Carmen Queral, they sprint one-minute dashes with 30 seconds of rest in between. They finish with 10 – 20 second dashes with 10 squats in between.