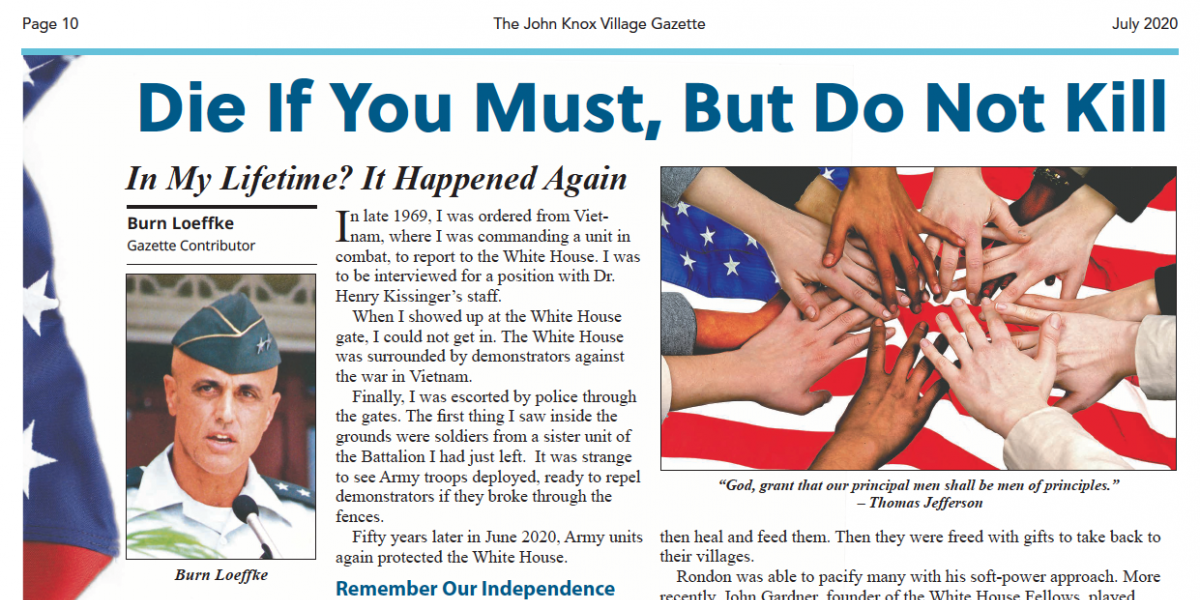 This month’s newsletter, as featured in the John Know Village Gazette in the July 2020 edition.

Die If You Must, But Do Not Kill

In My Lifetime? It Happened Again

In late 1969, I was ordered from Vietnam, where I was commanding a unit in combat, to report to the White House. I was to be interviewed for a position with Dr. Henry Kissinger’s staff.

When I showed up at the White House gate, I could not get in. The White House was surrounded by demonstrators against the war in Vietnam.

Finally, I was escorted by police through the gates. The first thing I saw inside the grounds were soldiers from a sister unit of the Battalion I had just left. It was strange to see Army troops deployed, ready to repel demonstrators if they broke through the fences.

This is Independence Month. On July 4, we remember George Washington, our first President, who said, “Integrity and firmness is all I can promise.” Another founding father, our second president, Thomas Jefferson stated, “God, grant that our principal men shall be men of principles.”

President Donald Trump gave the graduation speech at West Point this year. This is an institution that has an honor code that holds us to high standards: “I will not lie, cheat or steal or condone those who do.”

In the 1940s, the West Point football team had won national championships. Then, the majority of the team was expelled because some of the players were cheating on exams. Cadets who knew it was happening and did nothing were also expelled.

We need moral leaders with great courage. One of my favorites was Brazilian Col. Cândido Rondon, who in 1914, saved Teddy Roosevelt’s life in the Amazon. Col. Rondon’s mission was to pacify indigenous Indian tribes and open up the Western part of Brazil. His actions made him a role model in resisting the use of deadly force. Rondon gave one simple order to his soldiers, “Die if you must, but do not kill.”

Whenever they were attacked, his soldiers shot above the heads of the attackers. If the Indians kept coming, the soldiers were to wound them, then heal and feed them. Then they were freed with gifts to take back to their villages.

Rondon was able to pacify many with his soft-power approach. More recently, John Gardner, founder of the White House Fellows, played an important role in inspiring the young. One of his favorite statements about the role of a leader is to “Keep hope alive.” Today more than ever, we need men and women, who can not only restore the values of this great nation, but to be role models for our children.

What Can We Do?

Mother Teresa gives us advice, “I may not be able to do great things, but I can do many small things with love.” The key to better relations is simple, “Treat others with a caring attitude and respect.” Do good whenever and wherever we can.