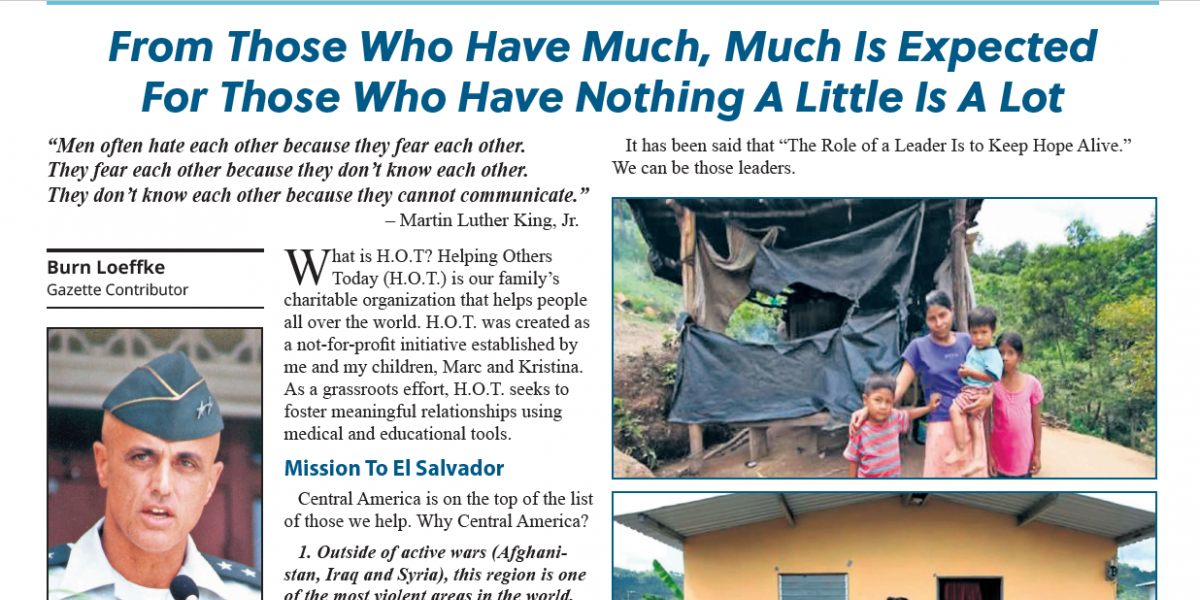 8-7-18 September gazette – Central America – Those Who Have Much

What is H.O.T? Helping Others Today (H.O.T.) is our family’s charitable organization that helps people all over the world. H.O.T. was created as a not-for-profit initiative established by me and my children, Marc and Kristina. As a grassroots effort, H.O.T. seeks to foster meaningful relationships using medical and educational tools.

1. Outside of active wars (Afghanistan, Iraq and Syria), this region is one of the most violent areas in the world. Desperation is caused by violence, loss of jobs, lack of education and many are homeless.

2. El Salvador is now the murder capital of the world. Because of this distinction hundreds are crossing U.S. borders illegally to escape homelessness, poverty and violence.

3. What can we do? H.O.T. is helping “Food for The Poor,” a South Florida organization building homes for the homeless. In February 2019, our organization plans to travel to El Salvador to help in the construction of habitable homes. Thirteen or more homes make a village. When we complete 13 or more homes, we build a well and a community center.

You can get involved. For several years, private citizens have been contributing to this effort. You can join us this coming February. We will teach you on our way to El Salvador, so you can be a teacher to poor youngsters. Call Chris Wallace at Food for the Poor (954) 427-2222 ext. 6300 for more information.

It has been said that “The Role of a Leader Is to Keep Hope Alive.” We can be those leaders.