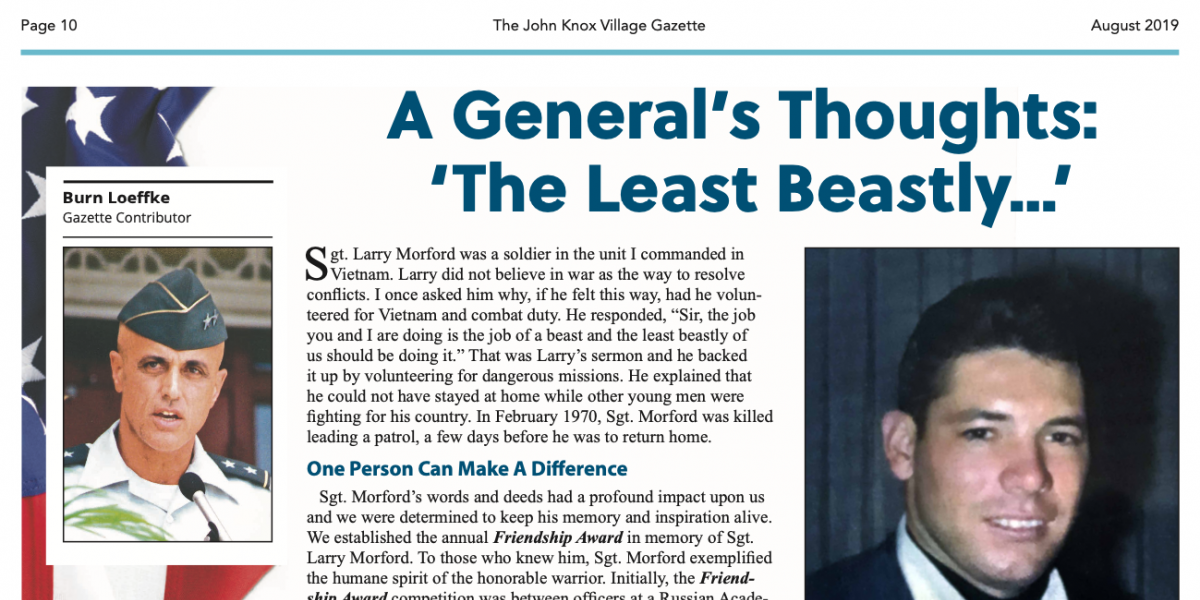 Sgt. Larry Morford was a soldier in the unit I commanded in Vietnam. Larry did not believe in war as the way to resolve conflicts. I once asked him why, if he felt this way, had he volun-

teered for Vietnam and combat duty. He responded, “Sir, the job you and I are doing is the job of a beast and the least beastly of
us should be doing it.” That was Larry’s sermon and he backed
it up by volunteering for dangerous missions. He explained that
he could not have stayed at home while other young men were fighting for his country. In February 1970, Sgt. Morford was killed leading a patrol, a few days before he was to return home.

One Person Can Make A Difference

Sgt. Morford’s words and deeds had a profound impact upon us and we were determined to keep his memory and inspiration alive. We established the annual Friendship Award in memory of Sgt. Larry Morford. To those who knew him, Sgt. Morford exemplified the humane spirit of the honorable warrior. Initially, the Friend- ship Award competition was between officers at a Russian Acade- my in Moscow and West Point Cadets. The award is presented to the cadets who write the best essays on how to improve relations with these two great countries. The first award went to a Russian officer who wrote an essay on the importance of chaplains in the U.S. Army. A year after the article was published, the Russian Army recruited Orthodox priests to serve as chaplains. This is
an example of the power of the written word.

In the biography: “The Big Yankee – The Life of Carlson of the Raiders,” author Michael Blankfort wrote, “Few men are won
by principles alone, but by men who preach and live them. We
are not followers of the word as much as of the deed that emerges from it. It was the example of Christ, not merely his sermon that conquered his followers.”

The sergeant changed my life with his words and example. He made me a better leader.

Preserving The Peace And Providing Security

Cardinal O’Neal, an American religious leader explains, “If I had not been a priest, I would have been a soldier because they are both called to do identical things – preservation of peace and providing security for the weak and innocent.”

We can all be good soldiers whether we wear a uniform or not. Selfless service is the mark of a good citizen.