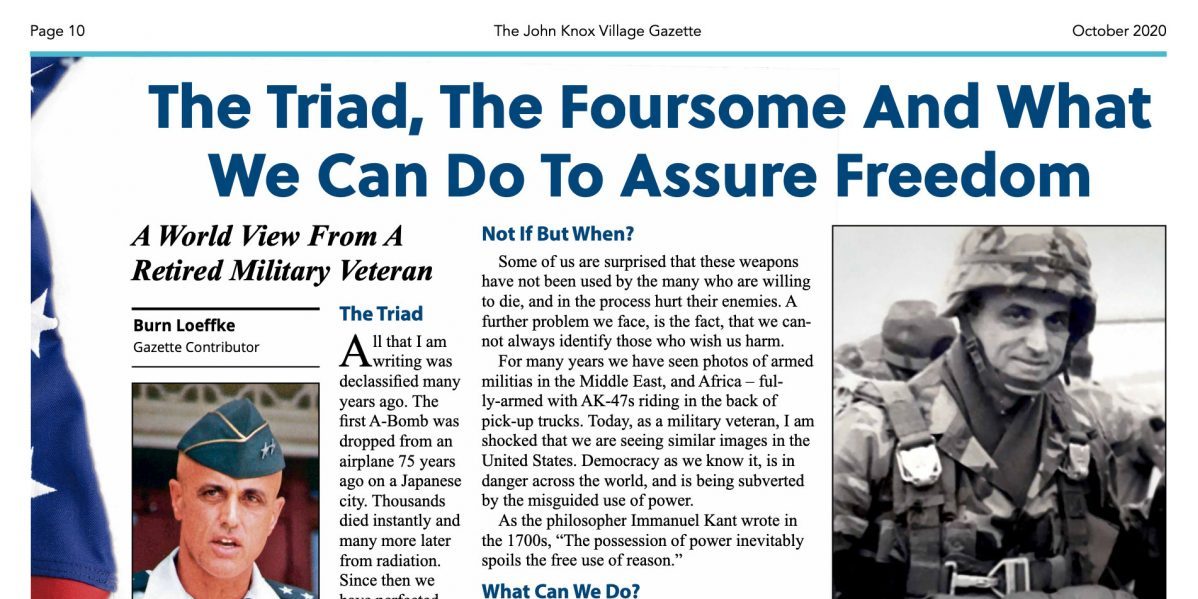 This month’s newsletter, as featured in the John Know Village Gazette in the October 2020 edition.

A World View From A Retired Military Veteran

All that I am writing was declassified many years ago. The first A-Bomb was dropped from an airplane 75 years ago on a Japanese city. Thousands died instantly and many more later from radiation. Since then we have perfected nuclear war with more deadly weapons and more efficient delivery systems.

Many of us grew up with the Triad, the acronym for the three delivery systems. The Bomber, the Submarine and lastly the huge ICBMs.

ICBMs are gigantic missiles housed in deep silos to protect them from destruction from an incoming enemy missile. ICBM stands for Inter-Continental Ballistic Missile and when launched can reach targets as far away as 5,000 miles in less than 20 minutes. Missiles launched from submarines are not as lethal but depending where they are when launched can reach a target in as little as 5 minutes.

There was a fourth system called the suitcase bomb. These were nuclear weapons small enough that could be carried in a large suitcase or carried by specially trained paratroopers.

I served for a short while in a Special Forces detachment that trained on jumping with these weapons. It is the suitcase bomb that worries me. When the Soviet Union collapsed several of these bombs went missing. Today, the technology is in the hands of those who wish us ill.

Not If But When?

Some of us are surprised that these weapons have not been used by the many who are willing to die, and in the process hurt their enemies. A further problem we face, is the fact, that we cannot always identify those who wish us harm.

For many years we have seen photos of armed militias in the Middle East, and Africa – fully-armed with AK-47s riding in the back of pick-up trucks. Today, as a military veteran, I am shocked that we are seeing similar images in the United States. Democracy as we know it, is in danger across the world, and is being subverted by the misguided use of power.

As the philosopher Immanuel Kant wrote in the 1700s, “The possession of power inevitably spoils the free use of reason.”

What Can We Do?

I have children. My hope is to create a world where our grandchildren can live in freedom without the threat of extinction from war, pandemic, pollution and climate change. As Mother Teresa was fond of saying; “I may not be able to do great things, but I can surely do many small things with love.”

Medicine, Food And Housing For The Poor

Instead of spending billions on more efficient ways to destroy each other, let’s cooperate in helping to alleviate suffering in our backyard. Let us feed the hungry. Let us build homes for the homeless. Let us work together to find medical solutions to afflictions that affect us all. And let us listen to each other. These are the kinds of efforts that help build friendships.

The United States has long been the example of freedom and liberty around the world. But those freedoms are in danger.

In one of the greatest speeches ever recited in American history, President Abraham Lincoln, on the grounds of the Gettysburg Battlefield closed his remarks with the famous words: “And that government of the people, by the people, for the people, shall not perish from the earth.”

I urge you to consider the future of your children and vote your conscience on Nov. 3.

Burn Loeffke, a retired military officer, has been wounded, survived two parachute malfunctions and two helicopter crashes in combat. As a captain in his 20s, he was  an Army swimming champion. As a colonel in his 40s, he participated in a military decathlon in Russia. As a general in his 50s, he ran three marathons in China. He has been an advisor to the President’s Council on Physical Fitness. As a senior, he starts each day at Hollywood Beach, FL with 200 stomach crunches, 10 minutes of stretching, and with Dr. Carmen Queral, they sprint one-minute dashes with 30 seconds of rest in between. They finish with 10 – 20 second dashes with 10 squats in between.